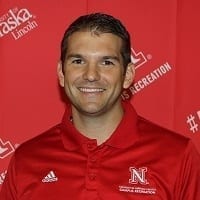 The purpose of the Regional Award of Merit is to honor a NIRSA member who has demonstrated exceptional performance in support of our region.  We appreciate those of you who have taken the time, whether this year or in the past, to nominate deserving professionals. We’d like to give a big congratulations to Zac Brost from the University of Nebraska-Lincoln who is the 2017 Region V Award of Merit winner.

Zac was nominated for this award due to his extensive role in Region V extramural tournaments, which he has been involved in since his time as an undergraduate student at Nebraska.  His nominator stated “Zac’s support of his staff of professionals and students in the officiating arena is to be commended, he values the whole experience and what it brings to the development of the students, professional, department, and to Region V.”  Congratulations to Zac Brost, our 2017 Region V Award of Merit winner and thank you for all that you do for Region V!